So, exciting news! A friend who has never played a tabletop, pen-and-paper roleplaying game before will be joining us this week for one session to try it out. His wife bought him a Player’s Handbook, and he has reached out to me a couple of times with excited questions. For a veteran roleplayer, there are few gaming pleasures greater than introducing a newbie into the family. I’m so excited for game night!

In Curse of Strahd Prep (part 1), I talked about molding the Curse of Strahd story to make it my own. I think Dungeon Masters should really feel free to dig in and mold stories to their own liking, and to the liking of their players. As someone who has written (or co-written) a few roleplaying products, I want to say that designers don’t view their own work as sacred texts. The best adventures leave a lot of room for the Dungeon Master to fiddle and tweak. The original writers have no idea what your play style is like, or the play style of your players. For some excellent essays on this — and many other topics — by designers a whole hell of a lot more prolific and experienced than I, check out Goodman Games’ How to Write Adventure Module That Don’t Suck.

Let’s get back to it! I want to talk about Morgantha, and her coven. The Old Bonegrinder is one of the creepiest areas of the adventure. And that’s saying a lot! A coven of night hags lives there, plying their evil trade of exchanging batches of dream pastries — baked goods that allow the consumer to slip into a euphoric dream state, thus temporarily escaping the oppressive realm of Barovia — with poverty-stricken, grief-stricken parents for their children, whose bones they grind up in their fiendish windmill to make more dream pastries. Pretty nasty stuff.

I wanted to add some additional depth to the witches. The first time I ran the adventure, I felt like I really dropped the ball with them. They basically just ended up being a couple of battles, and were then forgotten. I started imagining Strahd taking a mortal lover some time ago, promising to make her a vampire. But, like Strahd does, he grew bored of her (maybe she just wasn’t Tatyana-like enough for him), and he cast her aside before fulfilling his promise. He didn’t even have enough passion to kill her. She was too unimportant.

So Anabel, a mortal, was filled with deep rage and humiliation. She wanted, above all else, to have her revenge on Strahd. But Anabel knew that as a mortal, she had no chance against the powerful vampire lord, so she made a desperate trek up the frozen Balinok Mountains to attempt to strike a bargain with evil entities there that she once read about in a book in one of Strahd’s studies. Unfortunately, she was too frail for the harsh journey and she literally froze to death within sight of the Amber Temple’s facade. But her cries fell upon receptive ears, charged as they were with utter anguish. 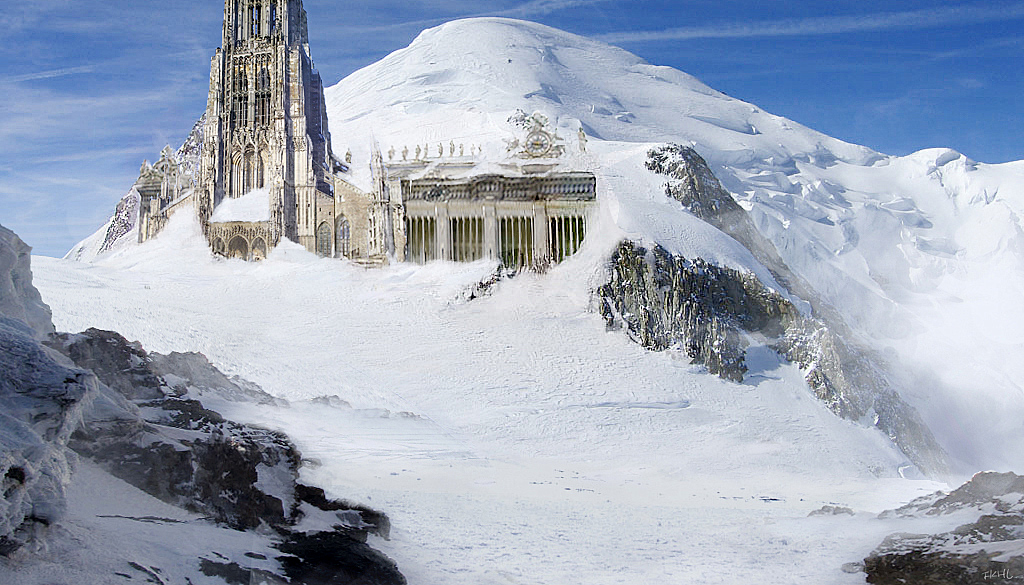 Long-dormant powers inside the Amber Temple granted Anabel the power she needed to begin a dark journey of vengeance: they raised her dead, frozen form as a bheur hag. When Anabel pried her own body up out of the frozen snow and realized her fate, her screams of anguish cascaded across the valleys.

Powerful though she was, Anabel knew she was still no match for Strahd, so she set about enacting a long game. She went to the Old Bonegrinder where she knew a coven of hags lived. Strahd had talked about them before. He long knew of the coven’s existence, but they were no threat to him, so he deigned for them to exist. Anabel, however, felt their activities were pedestrian and unimaginative, so she went to the windmill and slew Morgantha. Anabel then took the name Morgantha as her own, and gave Bella and Offalia (Morgantha’s daughters) a choice: follow her or die like their mother did.

With a coven all her own, the new Morgantha set about building a school of dark magic below the Old Bonegrinder windmill. She enslaved some workers from Barovia and Vallaki to dig out and build a complex below the windmill. Then she instructed her newly adopted daughters to only exchange dream pastries for male children, whose bones would be ground up to make more pastries. For females, however, a family would magically receive food for a year and a day. The female children were the key to Morgantha’s plan of vengeance.

Morgantha has been housing the girls in her subterranean chambers, teaching them dark arts and evil magics. She brainwashes and indoctrinates each of them to be absolutely loyal to her, and her alone. Any who show signs of willfulness or disobedience suffer the same fate as all of the boys that Morgantha’s daughters receive. Her plan is to create an army of witches to challenge Strahd, and eventually destroy him.

So what’s the point? I mean, why make this change at all? Just going around customizing everything just for the sake of giving it my own flavor, while rewarding, might not be the best use of time and energy. Ideally, there should be a point, some effect on the overall story.

A powerful, ongoing adversary. If the party members are heroic in nature, then a coven of evil, brainwashed witches could make for a powerful adversary. Early in the adventure, at lower levels, the party would be no match for the coven of hags, especially with Morgantha upgraded from a CR 5 night hag to a CR 7 bheur hag. But they may run afoul of the coven by countering their efforts in the Village of Barovia, or perhaps even by staging guerrilla raids on the Old Bonegrinder to free children. This could lead to witches being dispatched by Morgantha to thwart the party’s efforts at inopportune times.

A potential dark ally.  The enemy of my enemy is my friend, right? Maybe. But whether the adventurers are heroes making a reluctant alliance against a powerful foe, a group of possibly evil, self-interested travelers, or anything in between, there can be little doubt that Morgantha and her coven are a potent force with a preexisting hatred for the master of Castle Ravenloft. Against a foe as mighty as Strahd, can the party afford to overlook such powerful potential partners? And even if the adventurers look down their noses at such an alliance early on, after being beaten up by Barovia for weeks or maybe even months, they may eventually change their tune. And the cunning hags would recognize such desperation, and thus have the upper hand on negotiations.

A source of information. Morgantha and company have been increasing their knowledge for years. From the many groups of would-be heroes that Strahd lures into his lands, they have stolen many a tome or spellbook. Perhaps the party might find themselves negotiating with the evil hags for access to their knowledge.

A source of power. The DM might seed magic items, or even one of the items from the Fortunes of Ravenloft reading, into Morgantha’s subterranean caverns. Imagine having to fight your way into those dark horror chambers to retrieve a powerful item that will help in the quest to destroy Strahd! The 7 of glyphs card in the Fortunes of Ravenloft leads to the Old Bonegrinder. The treasure may be down in the undergrounds chambers instead of up in the windmill. Or the DM might decide that one of Morgantha’s “students” secretly wishes to escape her dark mistress’ grasp, and would repay her rescuers by aiding in the fight against Strahd (i.e., create a new entry for the Strahd’s enemy tarokka reading category).

However it goes down, whatever decisions the players make, I will be looking forward to seeing how Morgantha 2.0 and her witches organically develop. But one thing is for sure, I won’t be pushing any agenda. If the players take the story in such a way that doesn’t highlight my creation, I will roll with the punches. I think a significant mistake that a DM can make is to become emotionally attached to the party becoming involved in “pet” parts of the adventure. That leads to railroading, and may potentially lead to unhappy players.

Next week, I’m going to talk about my plans for the Mad Mage of Baratok! See you then.

View all posts by Jamie LaFountain